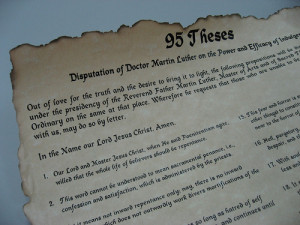 A confession is a self-accusation. A person who confesses says to the whole world, “Yes; this is what I believe, say, or do.”

The documents collectively referred to as the Lutheran Confessions came into existence in the 16th Century through disputes among Christians as to what certain aspects of the Bible meant.  Although the central tenets of the faith (described in the Creeds) were always beyond question because of the clarity with which Scripture teaches them, other areas were less clear.  Through conversation and even argument, those Christians calling themselves Lutheran became clear about what they believed made for a faithful proclamation of what God has done for us in Jesus and how to live a faithful life in response.

The Lutheran Confessions function for our church much the same way the American Constitution functions for the United States, setting boundaries and making clear what is central to our identity.  Within all the documents that comprise the Confessions (found here in their entirety), the Augsburg Confession serves roughly the same purpose in our lives as the Declaration of Independence does for the United States, and The Small Catechism guides the practical matters of our day to day life.